Mollet del Vallés is one of the satellite cities that orbit the metropolitan area of Barcelona. Originally a village of large farmhouses it has now become home to immigrants in search of prosperity. During the later part of the Franco era after the expropriation of property in the village of Gallecs in the very heart of the area, it was envisaged that the city would grow to reach half a million inhabitants. This colonization however was successfully opposed and the growth was limited to the areas of Plana Lledó, Santa Rosa and a third, new district. What eventually arose were three districts, three urban zones, three social environments, and in between, a space ripe with possibilities, the place asigned to Enric Miralles to develope the proyect. 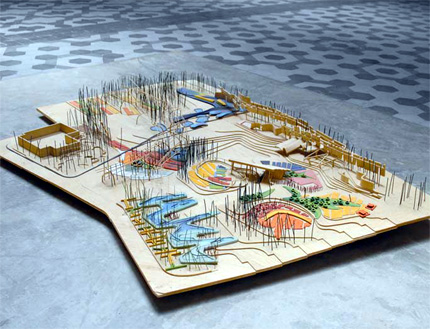 This entry was posted on Wednesday, November 22nd, 2017 at 19:59 and is filed under articles, news, paisea, public space, publications, urban parks, without category. You can follow any responses to this entry through the RSS 2.0 feed. You can skip to the end and leave a response. Pinging is currently not allowed.