Historical-cultural itineraries represent great fissures in the landscape, green corridors laden with time and memory, gigantic palimpsests of texts superimposed on the territory. I have, on numerous occasions during my career1, had the opportunity to encounter these landscapes and experience their great complexity. A pioneering experience was the realization of plans and landscape interventions on the Camino del Cid in Burgos and Soria2 provinces, creating a linear system that evoked the figure of Díaz Rodrigo de Vivar in his banishment to Valencia in the 11th century, as told in the epic poem ‘El Cantar del Mio Cid’. In the first and most intense of the projects, “El Cid en Vivar y Camino del Destierro” (El Cid in Vivar and the way of exile), we represented in detail the landscape between Vivar del Cid and the monastery of San Pedro Cardeña, with agricultural fields, natural features and human interventions, creating a 25 km green corridor to protect the remains of the old, almost vanished landscape, and building new minimalist and timeless fragments of landscape. 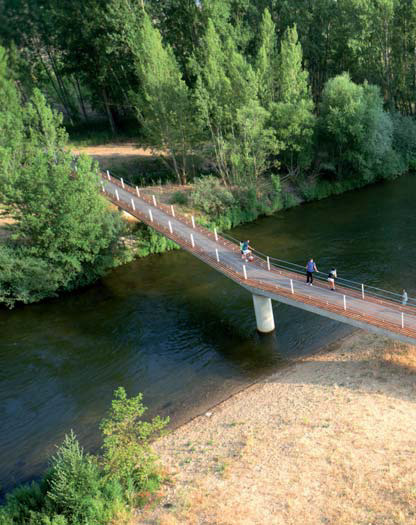 This entry was posted on Thursday, October 5th, 2017 at 09:30 and is filed under articles, cult landscape, news, paisea, publications, without category. You can follow any responses to this entry through the RSS 2.0 feed. You can skip to the end and leave a response. Pinging is currently not allowed.