Gardens of the Hospital in Valencia, Spain.  Guillermo Vázquez Consuegra 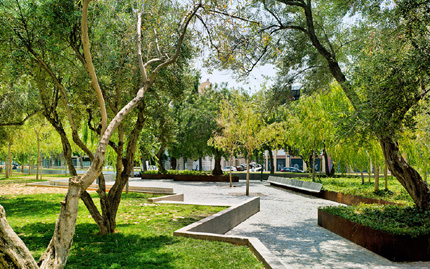 Gardens of the Hospital in Valencia – The project for the reorganization of the existing gardens of Hospital is set on the central idea of giving a unified treatment to the entire garden area, built on the site resulting from the demolition, in 1974, of the Hospital de los Pobres Inocentes, important example of hospital complex, whose history goes back to the early fifteenth century. Only the transept of the old nursing, the Capitulet and the little Chapel of Santa Lucia (XVI -XVIII), linked since the beginning to the hospital, survived to the demolition of the complex. 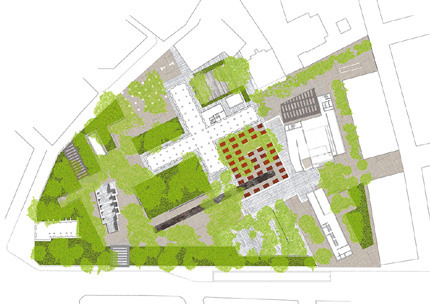 The existing gardens are located at a slightly elevated level of the street, which corresponds to the first line of stone blocks of the Hospital that was not removed.

A system of earthen paths, with staggered geometry defines different areas where trees of different species and archaeological remains scattered everywhere characterize this green space. The deterioration of the actual conditions and the recent construction of the Museum of Illustration suggest an overall renovation of the whole garden that would highlights how these open spaces are the result of the demolition of the old hospital building and the existing buildings are only fragments of the demolished hospital complex. 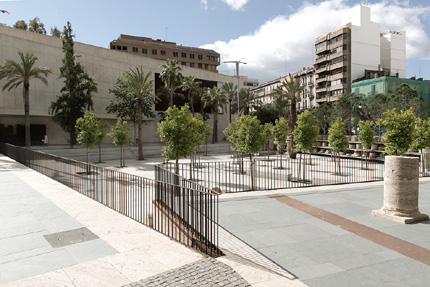 The renovation basically proposes flooring in only one material organized on a grid. A tapestry, consisting of small pieces of basalt will lay out on Cartesian geometry that takes its axis from the main piece of the gardens: the transept of the old nursing, nowadays converted into public library.

This entry was posted on Monday, August 17th, 2015 at 09:30 and is filed under competitions and prizes, news, paisea, results, without category. You can follow any responses to this entry through the RSS 2.0 feed. You can skip to the end and leave a response. Pinging is currently not allowed.